HOUSTON (January 23, 2012) – Mobil Steel International, Inc. president and CEO Leonard A. Bedell was named to the executive committee of the Associated Builders and Contractors, Inc. – Greater Houston Chapter. Bedell will serve ABC Houston as treasurer for 2012. Bedell was among six officers recognized at ABC Houston’s annual inauguration dinner and one of 35 industrial and commercial business leaders named to the ABC board of directors. 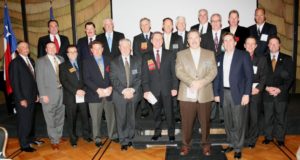 Bedell, who has been president and CEO of Mobil Steel since 2005, has strong qualifications for treasurer. He holds a BBA in accounting from Texas A&M University Kingsville and maintains an active certified public accountant’s license. He worked for accounting and financial firms before serving as a senior executive, president and CEO of several companies prior to joining Mobil Steel.

ABC Greater Houston is an affiliate of the Associated Builders and Contractors, Inc., a national association that protects free market enterprise and business freedoms of commercial and industrial contractors. ABC offers member training, education and networking. Additionally, ABC and its members support good government and fair and reasonable regulation through active participation in local, state and federal legislation.

Mobil Steel Employees Give Back to Industry as ABC Volunteers

“ABC Greater Houston has been an important ally to Mobil Steel by providing opportunities to meet and network with potential customers. We are pleased to be able to give back to ABC by rolling up our sleeves and working along side our customers and peers,” said Bedell. “I am grateful that I can do my small part by lending my accounting skills to treasurer’s role as part of my service to the ABC membership.”

Mobil Steel International, Inc. fabricates steel used in some of the world’s essential industries: chemical, manufacturing, petroleum, communication, clean fuels, and power utilities, as well as commercial construction. Mobil Steel, which has been at its South Wayside facility in Houston for 43 years, has a production capacity of more than 1,000 tons per month in its 80,000 square feet of plant and office facilities under roof, providing flexibility to manage multiple projects. The 8.5-acre site is located within major freeway access to the refining and petrochemical complex in the Gulf Coast region. Mobil Steel is quality certified by the American Institute of Steel Construction (AISC). For information about Mobil Steel visit www.mobilsteel.com.