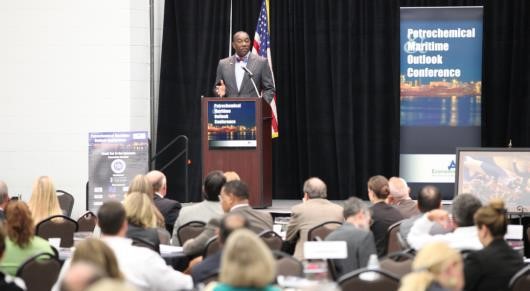 The attendees heard the president of the Texas Chemical Council say that Texas could see $10-25 billion in chemical industry expansion during the next five years as a result of accessible and abundant natural gas found in gas shale formations across America, including the Barnett Shale in North Texas and Eagle Ford Shale in South Texas. Senior executives with Dow Chemical, ExxonMobil, LyondellBasell and Shell backed up that statement with mentions of projects either announced or being considered in Texas or the U.S. Gulf Coast.

“The amount of natural gas available from shale gas production will be available for the long term,” Shipp assured the crowd of companies associated with the chemical industry.

The executive director of the Port of Houston, Colonel Len Waterworth, talked about $140 million in infrastructure investment the port has planned to meet its customers’ needs in the coming years, especially as larger ships come to the Port of Houston through the expanded Panama Canal. It is expected to be completed in 2014.

“It is exciting to hear positive outlooks from industry leaders and to gain insight into port and petrochemical infrastructure growth in the region,” said Leonard A. Bedell. “Mobil Steel is ready to fabricate the steel on these needed projects as we rebuild the region’s infrastructure and prepare for greater growth and prosperity in the years ahead.”

Bedell, Mobil Steel’s president and CEO, served as a silver level sponsor-host for the event. The outlook conference kicked off with a boat tour of the Houston Ship Channel and the Port of Houston’s Bayport Terminals the evening before presentations from maritime and petrochemical industry leaders.

Bedell was joined at the Mobil Steel table by Texas state representatives John Davis and Randy Weber, several candidates for elected office, as well as Mobil Steel business partners and customers. “This conference is a great opportunity to hear about new projects and to meet the leaders of companies for which Mobil Steel provides steel fabrication work,” Bedell added.

Mobil Steel International, Inc. fabricates steel used in some of the world’s essential industries: chemical, manufacturing, petroleum, communication, clean fuels, and power utilities, as well as commercial construction. Mobil Steel, which has been at its South Wayside Drive facility in Houston for 43 years, has a production capacity of more than 1,000 tons per month in its 80,000 square feet of plant and office facilities under roof, providing flexibility to manage multiple projects. The 8.5-acre site is located within major freeway access to the refining and petrochemical complex in the Gulf Coast region. Mobil Steel is quality certified by the American Institute of Steel Construction (AISC). Mobil Steel is active in Associated Builders and Contractors, Associated General Contractors, is a sponsoring member of Economic Alliance Houston Port Region and a member of the Pasadena Chamber of Commerce. For information about Mobil Steel visit www.mobilsteel.com.